Last week I finally joined a new corporation, and the past few days I’ve gotten more action than I did in the past few months.

I’ve gone on roams, I made a jita shopping list, even tried out ships I had never flown before.

I’ve been on two roams now in a Svipul and I enjoy the ship. I love the fact that it changes it’s look if you go in a different mode and it’s quite fun. Not only that, I haven’t lost one yet! Hooray

I did lose a claw a few days ago but that was my own fault. Silly me trying to be hero tackle. That obviously failed because I also failed to land on any other kill mail at the time.

The one thing I still need to get used to is that unlike when I was in High Sec, I can’t just open the market browser and buy whatever I need. I can’t, because the current market is non-existent. The corporation I joined does have a service from Jita to their home so that’s nice. Means I just need to make more shopping lists and figure out what I need and when I’ll be needing it.

Although it did got me thinking of maybe, just maybe setting up shop over there too. I’ll be looking into that once I’m used to it some more.

Unfortunately my ISK making ways have dried out a bit. My production lines are currently not doing anything because the profit I was making per day wasn’t enough anymore. 20million a day vs 100+ half a year ago. It’s a shame, it was easy ISK, and now I have no idea what to do to make more of it.

I’m trying my hand at station trading in Jita and Amarr a bit and I’m making ISK with it, but also only a few million per time, my production used to net me more. So I’ll have to figure out something new. Maybe in Null, maybe somewhere else.

I’m still thinking of w-space, and I’m looking around, I still have another combat character that I’m training to get into a wormhole, so maybe I can have her join a wormhole crew. If they’ll have me.

I have spent most of my evening jumping around different systems on my ex-RvB alt, trying to get all of its assets in the same spot. Let’s just say that it’s taken me quite some time and I’m even close to being finished.
I don’t like a mess in my assets window, on most of my accounts they are spread in about 4 or 5 systems. On that one alt, the assets are spread in 16 systems. Hence the clean up.
I’ve been able to just trash some things, Noob ships that were docked somewhere because I once went into the station without a pod.. Ores that were so low in number that using my time to bother with them would actually make me lose ISK.
Most of the spread right now is between Jita and one of its previous bases of operations near Amarr, seeing that this character used to run L4’s, in a time that I can no longer remember.
While “playing” I was checking EvEMon a bit and I couldn’t help but notice that I don’t have any skill plans, for any of my characters. I create one, and then I just ignore it and just wing it, deciding on the fly what to update the queue with.
I really should stop doing this, not only is it inefficient, it’s also not really helping me into knowing what my characters can and can’t do.
As the readers of my blog know, I flew a Dominix a while back. Which is a great example of me not knowing what I can do. Because when I was first asked if I could, I said no, until I was linked the fit and I noticed that I can actually use sentries, and that I can get into a Dominix. Now, that second part is just plain stupidity on my end because I fly a Machariel and have Gallente Battleship on V so I should have actually known better, but that’s beside the point.
The point is that I have absolutely no idea what to do with my two combat characters and my industrial character. I don’t know what to train and I just pick skills at random that look good.
Or I start working on the mastery and then just stop doing it altogether because I noticed another one that I liked better.
I didn’t actually resolve to do anything special this year. But if I’m going to, maybe I should just start with making a skill queue and decide on a path to take.
Stay tuned o7
Happy New Year to all four of you reading this blog!
Now that we’re done with that, let’s go back to EvE. December was a quiet month for me, real life I’ve been busier than usual and due to Steam sales and spending more time with my friends and girlfriend, I was slacking on the game a bit.
I did try out a few new things and I will be doing that some more in the New Year, seeing that I still want to go out in wormholes and see if I can kill some sleepers. I might even go check out null a bit, seeing that I have gotten an invite to join on a few roams with a guy I know that’s settled in Null.
Industry wise I’ve been slacking the most, I didn’t feel like calculating the logistic side of manufacturing this month so I’ve basically done nothing more than checking if I could manufacture items from what I had in stock, so my lines have been shut down the past few weeks. I will change that this week seeing that I’m doing invention again.
Speaking of which, I’ve been thinking about creating, or even buying a new science alt. One that I can use to invent more or just have my research chugging along, seeing that I only have one industrial character and a large POS that only I use, I figured that maybe having a second indy alt wouldn’t be such a bad idea.
Trading wise I’ve been fairly quiet too. I made a bit of profit on some items and loss on others. I’ve had a few 0.01 iskers send me angry eve-mails, which brought a smile to my face. And I’ve played the game trying out a few new items. My plan for this month is to actually do some research on more items instead of only selling and buying the items I use and manufacture.
I might also decide to move to another hub with my trader just because I want to see the action there, it’s not the smartest idea to do so if I don’t have the correct standings, but I don’t have them in the hub I work now and honestly don’t care that much about it, I’m just trying to figure out the market a bit and make a small profit from it.
Speaking of profit, according to jEveAssets and my Aura tool on android, my profit for this month was about 2b, so that’s not too bad for not doing much. I still have way too much ISK in my wallet though.

I need to start investing this, I just need to figure out in what. As everyone knows, you have to spend money to earn money, and this amount is not earning me anything as long as it stays in my wallet.
I’m starting this year with a total of 3 accounts and 6 Characters. I have 2 unused slots left and one of the characters is just a placeholder for a dummy corporation I created a few months ago.
If all goes well this year, I will be filling these slots and I might even start dual training.
Here’s to the new year!
Stay tuned o7
I started a station trader a few weeks ago. I don’t think I’m very good at it. I think I’m just a bit too lazy to do the research which would be good to sell and what wouldn’t be.
I made him start out with 100m and am currently working with a 1b buy order and 400m in sell orders. He was working in Dodixie but I decided to go to Amarr since it’s a bit closer to where I usually am at with my other characters and I actually haul things between Jita and Amarr every once in a while if the goods I manufacture sell for more there.
While trading I kept thinking who on earth would sit in front of his or her computer all day updating the orders for 0.01 isk. That has got to be the most boring way to spend your game time. Some of the people who do it are probably botters but still.
I like undercutting them with bigger margins though. As long as I make a profit, even if it’s only 5%, I’m a happy camper.
Working as a station trader is helping me get to know the market a bit more, I can see why some goods sell well, others don’t. But I’ve only been working it for a few weeks and have yet to get that ‘Eureka’ moment where I know of a few goods that I can invest in and sell in order to get my billions a month.
But it’s fun, it’s new, it’s .. Well not very exciting but at least I’m doing something new.
Speaking of doing something new. I’ve had a few offers from Wormhole corporations, and one in particular was a bit interesting,  I’m going to try them out, be their so called “Guinea pig” 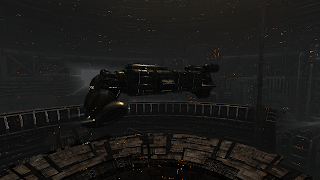